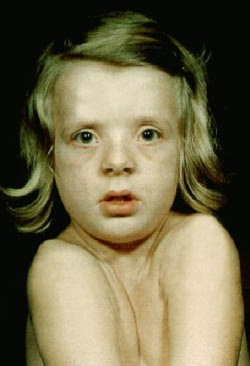 Cleidocranial dysostosis (cleidocranial dysplasia) is an autosomal dominant inherited condition consisting of hypoplasia or aplasia of the clavicles, delayed ossification of the cranial fontanelles, and a large, short skull. Associated features are shortness of stature, frontal and parietal bossing, failure to pneumatize the air sinuses, a high arched palate and/or clefting, mid-face hypoplasia, and failure of tooth eruption with multiple supernumerary teeth. Many of the teeth present have inherent abnormalities such as dilaceration of roots or crown gemination. Hypoplasia of secondary cementum may occur. The condition mainly, though NOT exclusively, affects membraneous bone.

Affected individuals may be 3 to 6 inches shorter than other members of their family, and may have:

Characteristic facial features may include:

Dental abnormalities seen in cleidocranial dysplasia may include:

It is transmitted as an autosomal dominant trait. CCD is caused by mutation in the RunX2 gene on Chromosome 6p21.

The RUNX2 gene provides instructions for making a protein that is involved in bone and cartilage development and maintenance. This protein is a transcription factor, which means it attaches (binds) to specific regions of DNA and helps control the activity of particular genes. Researchers believe that the RUNX2 protein acts as a "master switch," regulating a number of other genes involved in the development of cells that build bones (osteoblasts).

Some mutations change one protein building block (amino acid) in the RUNX2 protein.

Above mutations may cause..

· Premature closing of the coronal suture

Problems which child would have